You Dream It,
We Build It

To get an estimate
for your project,
fill out the form, or simply

Why You Should Hire Someone To Build a Waterfall Feature for a Backyard in Brookville, NY

Everyone wants their backyard to look beautiful. It’s your sanctuary; you should make it relaxing and perfect for you. One of the best ways to do this is to create a waterfall feature for a backyard in Nassau County.

However, should you do the job on your own, or should you hire someone to help? Backyard waterfalls in Brookville, NY are beautiful, but a lot can go wrong if you DIY a small pond. There’s a lot more at stake than aesthetics, though.

A lot goes into creating a garden pond. After all, you can’t make a water feature with just a garden hose, some shallow water, and a flat stone. You have to dig a decent-sized hole, know how to work electronics, and it takes time to get it perfect.

A Lot of Electrical Work Goes Into It

Backyard waterfalls are beautiful to look at, so you may not realize all the technology that lies behind them. After all, you have to do more than lay down a pond liner and fill the pond to create a gorgeous garden pond.

If you want a working outdoor waterfall in your Brookville, NY backyard, you need to invest in electrical and plumbing work. If you don’t have experience working as an electrician, you may struggle to do the job right. Plus, you don’t want to mix loose electrical lines with water.

Therefore, you should always call a pro when you want to build a pond with water moving. Also, it will cost a lot of money to do the job, mess up, then have to call someone to fix it. That’s especially true if you have already finished setting up your waterfall or pond. You have to place the electrical cords pretty far down, so you’ll most likely have to take everything apart if you didn’t do the job right the first time.

And a Lot of Digging

As we touched upon, you need to do a lot of digging to create a pond in Nassau County. While the result is gorgeous, do you want to spend hours, even days, digging a hole for it? That’s why you should leave this job to the professionals. They have the right tools and the experience to do the job well.

Plus, you have to dig evenly. Otherwise, you’ll have a lopsided pond. Even flexible liners can’t save you in this case. Show your backyard some respect by choosing the experts for your backyard waterfalls or pond designs.

You Can Get the Job Done Quicker

Professionals like us at Scott Anderson Design have the best tools and experience at our disposal to get the job done quickly. It can take you weeks, even months of work, to get your waterfall design looking perfect. Think of how many times you may have to go over the sides of the pond and reposition the liner.

When you don’t know what you’re doing, it will take longer to see the results you want, and it will take more effort. You can’t have a garden designed to perfection if you’ve never designed one before.

Finally, you get the best, highest quality job when you choose to go with a professional. Creating a backyard waterfall or garden pond isn’t easy; there are a lot of factors you need to consider. While you may have an image of what you want it to look like in your head, it may not turn out the way you want it to.

However, you take away that guesswork when you hire someone to build a waterfall feature for a backyard. While you have to pay more upfront, you’ll save money by having the job done right the first time. Besides, you’ll awe your friends with your gorgeous backyard. 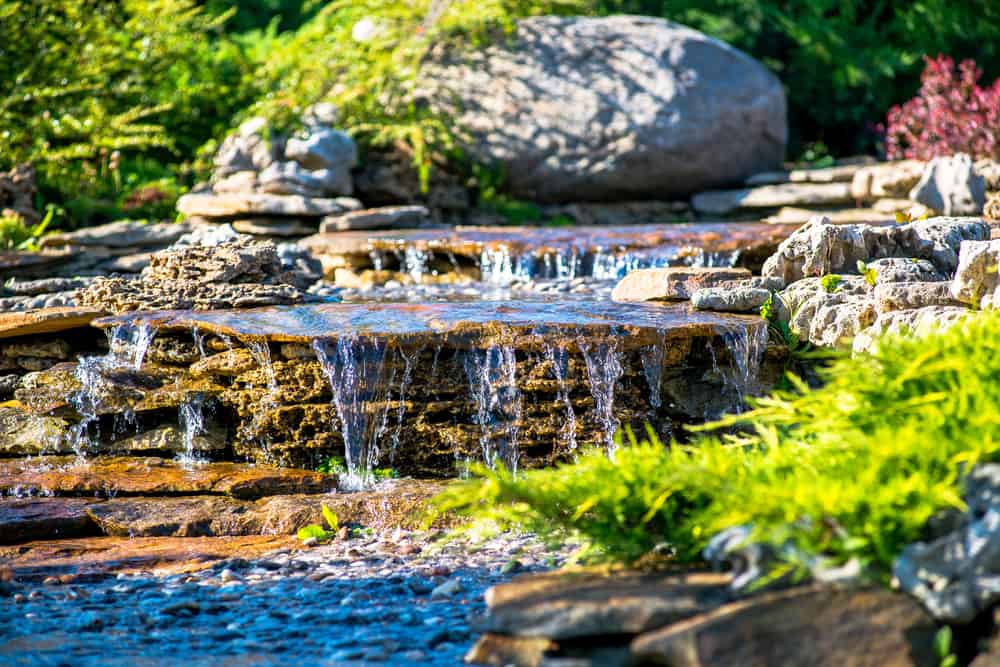 If you’re ready to create the perfect oasis with a waterfall feature for a backyard in Brookville, NY, call Scott Anderson Design at 516-729-5668. We have plenty of experience creating beautiful ponds and waterfalls.

Some information about Brookville, NY

Brookville is a village located within the Town of Oyster Bay in Nassau County, on Long Island, in New York, United States. As of the 2010 United States Census, the village population was 3,465.

The geographic Village of Brookville was formed in two stages. When the village was incorporated in 1931, it consisted of a long, narrow tract of land that was centered along Cedar Swamp Road (Route 107). In the 1950s, the northern portion of the unincorporated area then known as Wheatley Hills was annexed and incorporated into the village, approximately doubling the village’s area to its present 2,650 acres (1,070 ha).

When the town of Oyster Bay purchased what is now Brookville from the Matinecocks in the mid-17th century, the area was known as Suco’s Wigwam. Most pioneers were English, many of them Quakers. They were soon joined by Dutch settlers from western Long Island, who called the surrounding area Wolver Hollow, apparently because wolves gathered at spring-fed Shoo Brook to drink. For most of the 19th century, the village was called Tappentown after a prominent family. Brookville became the preferred name after the Civil War and was used on 1873 maps.

Brookville’s two centuries as a farm and woodland backwater changed quickly in the early 20th century as wealthy New Yorkers built lavish mansions. By the mid-1920s, there were 22 estates, part of the emergence of Nassau’s North Shore Gold Coast. One was Broadhollow, the 108-acre (0.44 km2) spread of attorney-banker-diplomat Winthrop W. Aldrich, which had a 40-room manor house. The second owner of Broadhollow was Alfred Gwynne Vanderbilt Jr., who was owner of the Belmont and Pimlico racetracks. Marjorie Merriweather Post, daughter of cereal creator Charles William Post, and her husband Edward Francis Hutton, the famous financier, built a lavish 70-room mansion on 178 acres (0.72 km2) called Hillwood.

Here are some remodeling-related links: